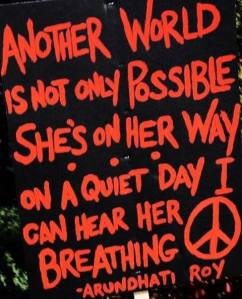 While having a soak in the tub this morning listening to a podcast with Desmond Tutu and Krista Tippet on her program, On Being,  on NPR Radio–I listened in as Desmond Tutu wondered in sadness at the many angry, vocal Christians, who side-by-side with their fear mongering brothers-in-arms, seem presently possessed by a kind of mad ideology these days. He observed that having strayed so far from their original call to love “even the least of these”, they now appear to be singularly focused on the sexual orientation of others while at the same time painting “the least of these” with the brush of “not quite human”.

To be fair, however, I will add there is a silent majority of caring and compassionate individuals who do practice their faith in accordance with the original tenets of their faith. I am not talking about them.

The world is changing quickly. This we know. It is natural to resist change, to step outside the safety of our comfort zones. This is also known. Yet I cannot help but believe these same angry individuals act and believe as they do out of a deep fear of “the other”, those whom they perceive as different from themselves. Obviously, someone has to be at fault for the troubled world they see reflected back at them.  Someone has to take the blame for the mess they think they are in. The fact is, the genie is out of the bottle, and they are working feverishly to stuff her back into that bottle. Their once secure landscape has changed, and they want it back.

Happily though, for many, the genie will never crawl back into her bottle. She has awoken from a long sleep and isn’t about to let anyone put her back in her place. She is finding her voice after being silenced for so long, and has she got a story to tell! The planet over, the genie is out. The time of secret holding and power mongering is being outed. Life everywhere is outing itself on streets and in homes in every nation, resisting the old ways of power gobbling systems that ultimately kill and keep people in shackles. People are talking to one another the world over, telling their stories, rising up, bringing in something new–a new way of showing up in the world, taking their power and dignity back along with their ability to think and decide for themselves what their lives should look like.

No one knows yet exactly what it will look like. We are making it up as we go. For sure, everything is made up in this life by someone or a committee of someones.

So while one system is being born, another is dying at the same time. It is most true that in order for something to live, something else has to die. This is the way of life, the natural order of how it is–but I’ll save that for another blog entry. Presently, chaos is at the helm while the adherents of fear in last stand attempt to stamp out anything they don’t yet understand.

Yet forces bigger than all of us–Life itself, is reworking itself into a higher order, and chaos is absolutely necessary at the same time while something else is arising, while the old system dies–and it will die. Here’s the thing–they might win some skirmishes, but eventually they will lose the war. A critical mass has been formed, and there is no stopping it now. And maybe, just maybe some of these same frightened individuals will discover love for the first time in the process with the realization you can’t authentically fix anything with hate, even if you believe God gave you license.

No matter how it looks, in the beginning, middle and end, love always has her way.

Flowers I've Loved with Pics to Prove It